Despite Covid-19 restrictions still underway in Los Angeles, local vintners are a plucky bunch, making plans for new tasting rooms, expanding their distribution networks and collaborating to brand LA wines as worthy of placement on wine lists alongside Napa, Santa Barbara, and other marquee appellations. Blatty, Cavaletti, and Angeleno have founded the Los Angeles Vintners Association to build market awareness of regional wines.

Blatty and his wife, Jenny, a fellow television producer, founded their winery in 2014. ‘We thought we needed the big stone building, the long driveway and the dog, and found out we could executive produce our winery by sourcing the grapes, leasing equipment and making wine in a shared facility.” They produce 500 cases at the co-op facility in Santa Clarita. While Malibu Coast is their designated sub-AVA, “it’s a little too micro for us,” Blatty says. “We put Los Angeles County on our bottles since we’re in the early stages of making it a legitimate wine region.” The brand’s Fall 2021 releases include the 2018 Byron Blatty Proprietary Red Cabernet Sauvignon blend ($150 a 750-ml.); the 2016 Tempranillo ($40); and the 2019 Tremor blend of Grenache, Syrah, and Petit Verdot ($50). The winemaking style trends toward “rich, powerful, yet balanced wines that showcase the region’s terroir, with fruit leading the way,” he adds. Blatty plans to open a tasting room in LA in the next year or so.

Los Angeles wineries produce small, artisanal lots, with a particular focus on locally sourced Bordeaux varietals. Some of them share production facilities, avoiding the expense of a full vineyard operation. A high-profile exception is the 14-acre Moraga Bel Air estate and winery owned by media mogul Rupert Murdoch and his wife Jerry Hall Murdoch. Moraga wines are exclusively estate produced, with 6.2 acres planted to grapes. The estate has a storied past, beginning as a horse ranch in the 1930s, owned then by director Victor Fleming of Gone with the Wind and the Wizard of Oz fame, and sold in 1959 to Tom Jones, CEO of Northrop Corp. Jones planted the first vineyard on the site in 1978 and under his ownership the estate developed into a full-fledged winery. He died in 2014, a year after Murdoch purchased the estate.

Paul Warson, a veteran winemaker with Foley Family Wines, took over winemaking duties from long-time Moraga employee Scott Rich in May 2021. They are producing 500 cases of Bordeaux varietal red blends ($175 a 750-ml.) and 300 cases of Sauvignon Blanc ($115). “We’re taking baby steps because the viticulture is perfect and the wines are terrific,” says Warson. However, he’s thinking of introducing a more new world style in future vintages.

“We hope to get more young, new wine fans interested in our wines,” says Jerry Murdoch. “They’re the future for the wine business if we can survive the fires and high temperatures of the last few years. We’re lucky with our microclimate and cool nights and the ocean mists.” Until the pandemic is over, she notes that Moraga is hosting limited groups for wine tastings.

Another Malibu winery, the 180-acre Rosenthal Estate owned by real estate entrepreneur George Rosenthal, has been listed for sale at $38 million.

Los Angeles vintners are adding to their base of local customers while finding some interest outside the area. “We’re satisfying wine buyers who are interested in tasting exceptional wines that are locally grown,” says Cavaletti Vineyards owner and winemaker Patrick Kelley. “We’ve focused on local specialty wine shops and wine bars where our wines will get the kind of attention that we want.” Cavaletti produces 1,200 cases from Los Angeles, Ventura, and Santa Barbara counties. Los Angeles County wines include the 109 Mile rosé ($25 a 750-ml.) and the 2018 109 Mile Grenache ($38).

Established Los Angeles vintners have made some headway onto high-end restaurant lists. Spencer’s Restaurant in Palm Springs, a 2021 Wine Spectator Award of Excellence winner, offers the 2016 Blatty Agenda Syrah ($89 a 750-ml.). “A lot of guests are looking for something different under $100. They want to be surprised. Blatty’s wines fit in that category and they’re coming into their own now,” says wine director Andre de Carteret. Spencer’s 1,150-selection wine list ranges from $36 for an Italian Pinot Grigio to $10,000 for Chateau Pétrus. The sweet spot is $100-$150 for a Napa Cabernet Sauvignon, de Carteret notes. “Our customers love Caymus but they want to try something else, and Los Angeles wines have a chance,” he says. “As more people get the wines in their glass and taste them, the market will grow.” However, competition is heating up from Paso Robles from brands like Saxum Vineyards, Ledge Rock Hill Winery, and Daou Vineyards, as well as from the emerging Baja Valley in Mexico, he says.

“Customers are always looking for something different and interesting. So, in a weird way, LA wines do fit since they are a niche play,” says David Osenbach, wine director at the Michelin-starred Los Angeles restaurant Providence. The 600-label wine list, curated to marry well with its fish-centric cuisine and tasting menu, is about half California origin, with the rest typically from France, Germany, and Austria. Providence offers the 2018 Byron Blatty Tremor Grenache blend ($115) and the 2016 Byron Blatty Evenfall Tempranillo blend ($160). “Los Angeles wines still are fighting the Napa bias,” Osenbach adds.

At the nexus of the Los Angeles-Hollywood community, Ryan January, wine and spirits buyer at the hybrid off- and on-premise venue Wally’s Wine & Spirits, serves an upmarket clientele very comfortable with the $100-$150 sweet spot. January’s West Los Angeles customers “tend to drink brands for the prestige.” However, he supports local vintners by hand selling LA labels. “Moraga Bel Air and Byron Blatty have set the bar for what you can do in Los Angeles County,” he says, noting that a favorite at the store is the 2016 Byron Blatty Agenda ($55). “It exhibits Napa quality with depth and complexity at a relatively affordable price.” Moraga Bel Air’s Bordeaux blend ($175) and Sauvignon Blanc ($115) are sold out, he adds.

Toward A Post-Pandemic Future

Young wine entrepreneurs like Amy Luftig Viste and Jasper Dickson of Angeleno Wine Co. and Ben Sposato of Acri Wine Co. are looking past the Covid-19 pandemic to add production and reach more consumers through tasting venues and DTC promotions. Angeleno began processing fruit at its own winery in 2018. They opened their tasting room in north Chinatown in 2019, had to close soon after due to the pandemic, and were able to reopen in May. “Los Angeles gets a lot of tourists so we get more recognition, plus our local market is the 10 million people of Los Angeles,” says Dickson. Angeleno produces up to 2,000 cases of small batch, locally sourced, lesser-known varietals like Tannat and Alicante Bouschet. “By making good wines that people haven’t tried before, we’re helping put LA on the map as a serious wine region,” says Luftig Viste.

Ben and Katy Sposato founded Acri Wine Co. in 2018. In addition to producing about 300 cases of traditional reds, Acri is expanding to Italian varietals. “We found that Iberian and central and southern Italian grapes do so well in southern California due to the warm climate and elevation,” he explains. Acri is sourcing Nebbiolo, Aglianico, Fiano and Sangiovese grapes from LA and San Diego appellations. First out in March, the wines are priced to be affordable, says Sposato. Current selections like the Smith Family Vineyard Zinfandel ($34 a 750-ml.) are getting good reception at local shops, he notes. A tasting room is planned for the future.

For real impact outside Los Angeles, more needs to be done. “If you want to get the wine out there do a wine by-the-glass program with competitive wholesale pricing to make the margins work,” says de Carteret. “Also, extend the winery’s reach with a second label and blend from other vineyards,” he added. “Bring the history and legacy of Los Angeles winemaking to the consumer,” says former Moraga Bel Air winemaker Scott Rich, founder of Glen Ellen-based Talisman winery. “Take advantage of the fact Los Angeles is the origin of the wine industry in California.”

Cavaletti’s Kelley believes it all will work. “We’ll never be a huge producing region, but I think we’ll come to a place where every important wine list in Los Angeles has a local section with Los Angeles-grown wines,” he says. 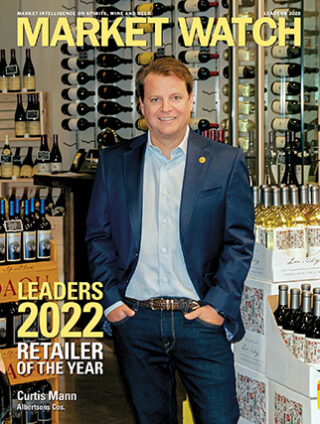 Late-breaking news on the spirits, wine and beer business.